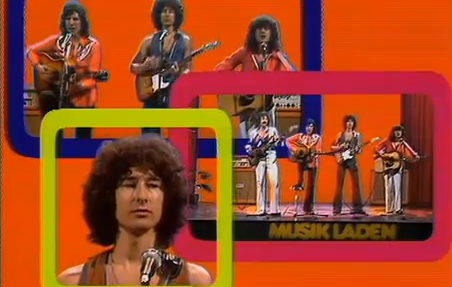 In 1962 two brothers Andre and Henk Groote from Apeldoorn the Netherlands started as a two piece band performing songs of the Everly Brothers, Hank Locklin etc. After two years brother Ben joined them playing drums and also added a third voice to their music. The band named Goldstar Brothers was completed by Willem Anthonius on bassguitar. The Goldstar Brothers recorded three 45 rpm before they changed their name into Geebros in 1967. Willem Anthonius was replaced by Cor Mestebeld from Zwolle and Lol Nijhuis became the organ and piano player.
Geebros recorded several 45´s. Henry the Horse reached the Dutch charts in 1967. You can hear psychedelich music combined with strong close harmony singing in songs like Let me find the sun, She, Ev´ry day and Shadows of stone.
In 1969 Lol Nijhuis left the band and was replaced by the Hennie Backers, a Hammond player from Zwolle. The musical style changed into more progressive rock . They changed their name into Crying Wood. The album Forward in time was only released in Canada. The single Blue eyed witch/Trip had a lot of airplay on Dutch radio but didn´t reach the charts. After lots of gigs in the Netherlands, Germany and Belgium Crying Wood stopped as a band in 1971. Some of the tracks of the album can be found on youtube.
In 1972 Canta Libre a song composed and produced by Hans Bouwens a.k.a. George-Little Green Bag- Baker was released under the name of Geebros again.
In 1974 drummer Ben Groote formed a band with the name Crying Wood again. Other members Will Meurs –later forming a band with Vandenberg bassplayer Dick Kemper- on vocals, Jan Veldkamp later replaced by Otto Fledderus, leadguitar, Cor Lievers keyboards-also doing gigs with Vandenberg later- and Gert Kozijn bassguitar. This line-up stopped in 1976 after many live gigs in the Netherlands and Germany. Some of their recordings are on youtube.
In 1976 the Andre, Henk and Ben Groote together with Geebros bass player Cor Mestebelt formed Airbubble. Their first recording Racing Car/ Dj´s Blue jeans, written and produced by the later BZN producer Roy Beltman )and co/writer Ilja Gort was a huge succes in the Netherlands and Europe. Airbubble recorded several 45´s till 1981, when they stopped as a band.
Andre and Henk also recorded a Everly Brothers tribute For Everly Yours under the name Cadillac.
Andre Groote recorded an album in Dutch language in the eighties.
November 2011
In November 2010 Geebros was asked to perform at the yearly Apeldoorn sixties festival Soos ´ 59 reunion. After a very successful gig of 50 minutes the band decided to continue.
Line-up Geebros 2011
Henk Groote- leadvocals and guitar
Ben Groote- leadvocals and drums
Max Tack- guitars,bassguitar and vocals
Jeroen de Haas- guitars and vocals
Kees Jan Caron- keyboards
Gert Kozijn- bassguitar, slide and steelguitar.
The repertoire is a mix of old songs of Goldstar Brothers, Geebros, Crying Wood and Airbubble and songs from the Everly Brothers, the Beatles, the Beach Boys etc. Strong close harmony again!
Bron

Geebros – The Shadow of Stone